Skip to content
The EditorJanuary 30, 2010 Mission News No Comments 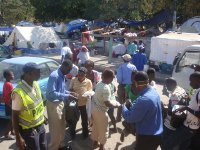 Easy beginning of the distribution

Serving in the name of Jesus 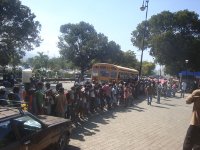 Waiting and hoping to receive a kit

We outlined our plan in the Leadership meeting on Monday.  On Tuesday we purchased the stuff we needed, Wednesday was spent packaging and first preparations for the cooking of the food through the night all the way to Thursday morning. We had planned to leave campus at 6 am.

We left at 7 o’clock. We left fearing what was waiting for us at Port-au-Prince. We did not think that Saint-Marc would be tough. We did not expect any difficulty because we had experienced our previous distributions in Gonaives in volatile areas and all went very smoothly. I was in Saint-Marc two days prior to the distribution and it was quiet and peaceful then. 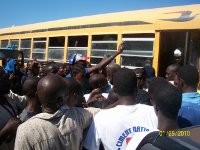 However, on Thursday morning we faced a crowd who would not listen to us. Our words did not convince them. The security guard who was on our side at the beginning turned his back against us saying, “If you cannot unload the bus outside for us, leave.” So disappointed and angry inside (at least I was), we left. Now we were wondering, if Saint-Marc is this way, how will Port-au-Prince be?

After the unfortunate experience in Saint-Marc I called a friend of mine who is a policeman working in Port-au-prince.  I explained to him my need for his assistance and he told me where to find him. So, as we were getting closer and closer to Port-au-Prince we were praying in our hearts and making more phones calls. 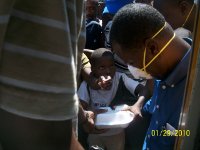 The kids fight for their plate too

We met him after about 45 minutes waiting. When Benira came he quizzed us. Then we asked for his advice and he and three other friends of his, who were also policemen, gave us their full assistance.

They suggested for us to go to Nazon and Avenue Poupelard where people had received little or no help. However, we found out minutes later those places were inaccessible.

So we changed plans and set off to distribute in the infamous Champ de Mars, where thousands of people are living in critical conditions.  It has become a shantytown and a situation where people, young and old, women and men, are fighting to survive. Some of them are tired of fighting because they know they have little chance to find anything. 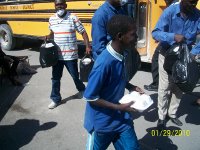 A young lady almost brought tears to my eyes when you could read in her tearing face, “I give up.” Seeing that, I made sure she received a plate. Another young boy was shoved to the ground and again my heart ached.  I sent Monexant to talk with him one on one and took him a care package. I don’t know which the boy liked more — the talk or the package.  But it was visible that the shame was slowly disappearing as Monexant was talking with him.

We also served over 300 care packages with a little of everything: food (rice, sardines, oil, peanut butter, crackers) cleaning stuff (soap, laundry detergent, tooth paste, brush) candle, matches, deodorant, and other things for the ladies. Yet we left with a bitter-sweet emotion.

I was very pleased by the fact the distribution went so well. Praise the Lord and thanks to all of you who prayed. Yet I wish we could have gone  with three buses full of stuff, but even then it would not be enough.  If we had more we could serve more in the name of Jesus.

I think each drop in the bucket makes it easier on a few people to face another day. I wanted to smile when I heard the lady, after gratefully grabbing her kit, shouting “praise the Lord, I finally find something.” You know, just seeing her reaction it was worth the trip.  But I think there were about a thousand or more like her who received the same blessing and who were overjoyed.

May God shower His blessings on you as we continue to serve these needy people in the name of Jesus.