Skip to content
The EditorMarch 8, 2010 Mission News No Comments 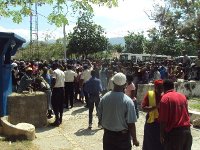 I will be with you!

Greetings to you in the name of our Great and All Powerful God: Jesus!

To Jeremiah (Jeremiah 1:8); to the bearers and teachers of the gospel (Matthew 28:20) and to Paul (1 Corinthians 18:10), He said, “I am with you.” He makes this promise to His servants every time He sees that there is fear, a sense of inadequacy, or monumental challenges before those who are in His service. The truth is “He always keeps His promises.” That is comforting. That is encouraging. That solves a lot of problems for many of this servants.

After serving many people in Gonaives, Saint-Marc, Port-au-Prince and Leogane with very little or no problems, we thought we had it figured out. Yet we never face a challenge of distribution without relying on God for everything to go well. It is a good thing we prayed and we had people praying for our distribution last Tuesday, otherwise we could have experienced the worst. 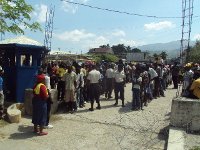 Last Tuesday we left Gonaives very early. We left at 4:30 A.M. heading to Petit-Goave. We left with 300 family kits, plus 55 other small kits. We knew when we finished distributing the 300 family kits the small ones will still be like jewels. We also left with 300 cards. We had planned to distribute the cards while telling the people where the distribution will be done and the time of distribution — just as we have done in the past. However, this time we had never before met the people we were connected with, and we had never been in the city of Petit-Goave prior to the distribution.

When we got there the people who were to meet us were a few minutes late. Then they led us to a church building. We talked a little bit about what we are there to do, and how we wanted to proceed and we asked for their input. One of them told us upfront that he was not going to be part of any kind of distribution. He told us why and his reasons were logical and sensitive. We respected that. 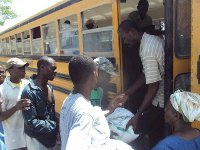 Robin is handing the kits to people one at a time

He then suggested what he thought was the best process. We agreed because we had basically the same plan, but the other guy wanted to do something that was not part of our plan and this has changed the whole chemistry of things. Micah, Melio, Jean-Gilles and I tried to fix things up, but enough damage was already done and it was only God who could have fixed things.

When we distributed the cards they led us in places where people were literally violent. Brother Abel and his team faced the biggest of all challenges. The crowd basically wanted to tear him apart just to get the cards from him. He was in the middle of a crowd of hundreds people and he had only about 50 cards. 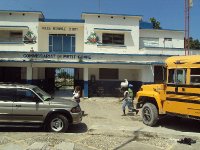 These gals head home with hope

My team was distributing cards in another section of town when my phone rang. I picked it up and Murielle nervously tried to tell me what was going on. By the time I told her I would intervene, my phone rang again and this time it was about Jude the builder. They told me that policemen had arrested Jude. “Why?” was my question. The response was that he was in the middle of a mob, but they don’t know why he had been arrested. Then they told me that the policemen were waiting for me at the police station. By this time my phone went crazy. One of the calls was from brother Micah. I sent him to Jude while I headed toward Abel. Brief. Only God could have made everything end the way it did.

It turned out that the policemen pretended that they were putting Jude under arrest to save Jude’s life. There were people coming toward Jude with knives and rods to fight for cards. Yes, the peole are that desperate. Abel had taken refuge in a small police station at the entrance of the city. When I got there I had the assistance of a couple of policemen. They escorted me with their guns drawn. Abel, sister Lena and sister Widler were taken by police car to the bigger down town police station. It was there we finally made the distribution. We would not have had a chance in the other place. 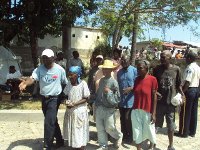 Micah leading these elderly to the distribution point

With the huge efforts of the policemen, and the vigilance of Living Water people, God made a safe distribution at Petit-Goave. It was quite a day! We had never experienced anything like this before and certainly we don’t want anything like it again.

When it was all over the policemen followed our bus until we left the city and we returned to Gonaives. Did I like what happen? No! Did I see God’s presence with us during the whole time? Emphaticly yes! He promised it and he did it: “I will be with you” or “I am with you.”

We had a bigger distribution in Petit-Goave than in Leogane. We served more families there and we are glad we did. This was possible because many people made it possible. I have to say thanks to IDES and all the other supporters of Living Water. You brought a lot of smiles that day when the distribution was going on. We saw people dancing. We heard some say that the care of their kids is assured at least for the week. One lady even asked me to take one of her 6 children because their father had died. Though my heart was broken, I could not say yes. I saw tears come down from people’s eyes when they thought the food would run out before they received their kits. It is ironic to say, but most of us felt we were needed there. Though one of us said, “Lord send me everywhere, but please don’t send me to Petit-Goave.” 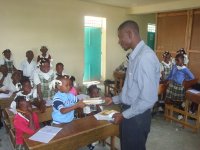 You face trials in His service but please hear Him say to you, “I will be with you or I am with you.”

Please look at the 6 pictures with this message. The first five are about the distribution in Petit-Goave and the last one is about the book distribution to the earthquake victim kids who are at Living Water. All 79 students have already received a uniform, school books and money for shoes.

Now we turn to helping those who have been welcomed by a family in Gonaives and who are victims of the earthquake. Some request money to rent a house, others clothes, and the means to have a small retail business. Still others would like to have funds for continuing education in Gonaives. All of them are in need of food. We will focus for the next few weeks on those people. We would also like to buy some tents to distribute to those who need them in Port-au-Prince in the future if the funds allow us to do that.

We thank you for your generosity. We will do what the funds allow us to do. We also beg for your prayers for guidance as we continue to serve those in dire needs.

It is time for me to stop. Just remember he said to His servants, “I am with you.”