Skip to content
The EditorApril 16, 2011 Mission News No Comments 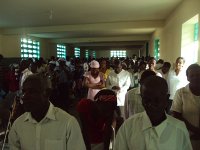 Worship in prayer on Sunday April 3

Victory in Spite of the effort of the enemy.

Greetings to you in His name!

Satan can not handle seeing the progress of God’s work. Whenever God’s people are united to do something significant, he always tries to find a way to slow it down or stop it. Well, we all know that the end of the battle is already decided and that those who are in Christ will win. Because of their attachment to Jesus nothing will be successful in separating them from Christ.

Christ Himself will not forsake any of those who chose Him as Lord. Therefore whatever happens, we are and will be more than conquerors. Paul’s hardship and distresses, as he told them in second Corinthians, did not make him quit. Therefore neither should we. You may face tough trials in your life today, but remember: you have already won as a Christian. 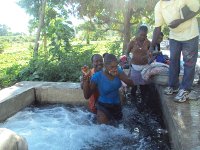 She is one of several who made Jesus their Lord

Since my wife’s return to Haiti, she has faced many challenges. For several days last weekend she did not feel well at all. She is better now, praise God. After that she has been facing one problem after another, enough to have discouraged her. And on top of that Satan has not stopped attacking the school.

Yesterday an extension cord blew up in the computer lab. Students, fearing it was something worse, ran from the lab. The noise of their feet on the second level made the rest of the school think it was an eartquake. To sum things up, twenty students ended up hurt, a couple of them very bad. Yet thank God there were no broken legs or arms. God protected us from larger problems. Victory will always be ours. Thank God for Micah, Germina, Gine and the rest of the workers there.

In the past two weeks I have had the privilege of being around old and new friends. They are people who are committed to fight so that the victory is not only known in the spiritual world, but also visible in our world, so that others may know it. Among those committed fighters are the brothers and sisters of Spring Hill Christian Church, Miamitown Church of Christ, Heartland, Holy Ground fellowship and the Saints who are being shepherd by brother Warren Ashley. 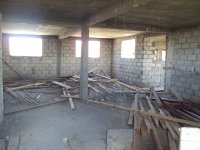 Cleaning time for the second story of the Dinning Hall

I have been around men of God like Dr. Krone, brothers such as Bovic Lola, Luigi and family, Kent Troutman, Gary Stump, Kirby Kepner, godly men of Truth at Work, Brad Pointer and family, Ken and Pat Croll, to name a few. These people enriched my life. I pray that we will stick together to fight our common enemy Satan, so that Christ may be known by more and more in Haiti every day.

I will ask you to pray for the following people. They are all soldiers of the cross: The Pointer family for Kerri’s dad who is sick and does not know Jesus yet, for brother Dale Blevins, also sick and for Regina Green who is fighting cancer. Our God is able.

I have included five picture. The first two explain themselves. The third shows the roof of the Dinning hall after the concrete work was finished. The last two give a glimpse of what took place at the school yesterday. No matter what the enemy is trying to do, we are more than conquerors. Stay at the feet of Jesus. 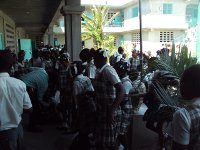 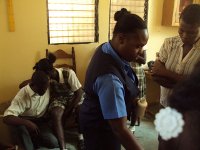 Germina and Gine taking care of the students