Skip to content
The EditorApril 22, 2011 Mission News No Comments 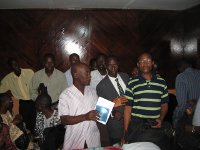 Some of the preachers in Liberia

My Trip to Africa: A Long Overdue Report

This report epitomizes the fact that I can be an excellent procrastinator. My apology to all of you who were waiting for almost 6 months to read the report. The last few weeks I have confirmed over and over again that you were waiting for it. Everywhere I went some of you wondered about the trip. Thanks so much for taking it to heart. I appreciate that.

First of all, I have always wanted to travel on a mission trip with brother Reggie Thomas. The opportunity came when he invited me to join the team going to Liberia. After a fairly long process my visa finally came and I was ready to go. This trip would not have been possible if many of you were not praying and if God was not in it. 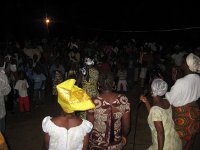 A people on fire for the Lord

I started to travel on October 20, 2010 from Haiti to Miami, to Chicago. Then to Belgium and from there to Monrovia, Liberia. Arriving there, like most mission trips, the team had little time to rest. We were quickly assigned our preaching points and we were connected with the local preacher we were going to work with. I did not have time to enjoy everything that was around me, but I fell in love with the people and with the culture. In fact, it would not be a too big a stretch for me to be a fulltime missionary there. My skin color is also an advantage. One of my African colleagues told me, you look just like us until you start speaking.

I worked with two different preachers like all the evangelists who were in the trip. From Saturday to Tuesday I worked with brother Jackson Cokorlie and from Wednesday to the next Sunday morning, I worked with brother Edward Weah. They are great people and passionate people! We have lots of things to learn from Liberian Christians. I was shocked one night when the people came to the crusade point while it was still pouring rain. And that night, if I remembered well, 11 were baptized into Christ. 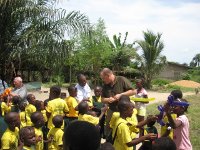 Serving His little ones

During the time I was there I preached two crusades; did some door to door evangelism; visited four schools operated by Christian Church preachers and I visited one orphanage. I got to address a group of Liberian brothers and sisters on one occasion and talked twice with teenagers in the school where brother Weah is preaching. I also got to have one session with the baptized believers in both churches. I preached and distributed some Bibles to them as well. I was blessed to witness more than 90 became new members of the kingdom during the two crusades that I preached. What a privilege that was.

I met some great men and women of God. They are people who are passionate about missions. My closest friend was brother Cody McDaniel. We roomed together. We got to talk more and shared our stories. W became pretty close friends. I enjoyed Liberian food, except it was too hot (spicy hot) for me. The preachers wives were nice enough to cook it for my feeble stomach. 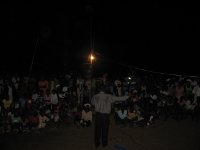 There are lots of people who worked hard to make that trip possible. Let me name a few: Phil Marley, Dick and Sandy Hershman, Lucma Adolphe, Fred and Jan Green, John and Helen Meyers, Daniel Petit-Frere, Bill Fussner, Living Water Christian Church family and many more. I don’t want to go in details telling you how God used them, but these people made possible the harvest of many Liberians for the Kingdom.

I suspect you are asking if I would go back? In a heart beat. I love that land. I love the people there. So whenever God sends me, I will be more than happy to board the plane and go. Please pray for them. Pray for brother Mike Foday who is doing a job that Satan will not certainly like.

Pray for all the preachers as they are facing giants obstacles to survive each day.

Thanks for sending me.

Your brother in Christ,
Salonique Adolphe 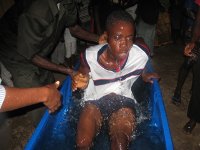