Skip to content
The EditorSeptember 19, 2012 Mission News No Comments 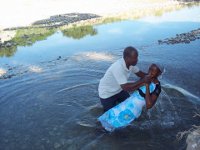 A New Child of God

Greetings to you in the name of our loving and caring Lord: JESUS!

Tonight everything is relatively calm. I may overhear the cry of a needy boy, or the voices of my boys in the living room, but it is not what it was eight years ago at this time. Water was already very high. The cries of dying and desperate people filled the city. No one was sure that they would make it the next day. It was a terrible night. Tonight is the kind we need. We reiterate our thanks to all those who kept us in the game when we just wanted to quit. Since then God has done wonderful things to further the progress of HIS kingdom here. 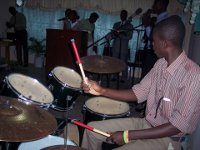 Between Friday and Saturday we had 16 new baptisms. There were 6 from the mother church and 10 from the brand new church plant, our six weeks old baby. They had 91 in service last Sunday. We had just a little more than 600 here. I don’t know what they had in Marmelade, but I do know they had 193 the Sunday before. We praise God for those who surrender their lives to Him and for those who give themselves to His service.

One of those people is our young brother Wilny Occean. A young man who is in 12th grade this year. He has had some training both from musicians here and some of our missionaries like Paul Green and Brian Sevits. In fact, the battery set that brother Wilny is playing in this picture was a gift from Timberlake Christian Church and brother Brian Sevits. Brother Brian went way beyond the extra mile so that we can have this set as soon as possible. We started to use it the very same day it arrived in Gonaives. Thanks to our brothers there. 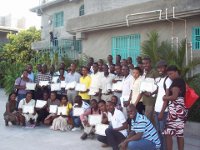 People Who Participated in the Sunday School Teacher Training Seminar

Last week, we had a three-day seminar for all the Sunday School teachers and assistants. It included those who are considering teaching Sunday School, but are not quite sure yet if it is something they want to choose as ministry. Three of the trainers are actual advanced students at our Bible College: Fevrier, Casséus and Abraham. Other speakers were Jacob, Rosemond and myself.

The session started at 9, broke at 1 and returned after lunch from 2 PM to 6 PM. Saying it was tiring would be an understatement. All of them thought they needed a longer period of training. There is so much to know in other to do a better job as a Sunday School teacher. At the end of the three days we gave a certificate to those who did not miss any sessions. We do this because we saw the need of not just recruiting kingdom’s servants, but also to train them according to our capacity.

The truth remains: “The harvest is plentiful, the workers are few.” Are you one of the workers? Will you be one?

In Christ,
Salonique and team