Skip to content
The EditorOctober 15, 2012 Mission News No Comments 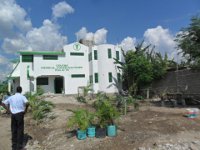 In the Name of Jesus

I have a hard time knowing where to begin. When I was in the States last Spring I decided that October 10th of this year would be the inauguration date for the health clinic. There were a lot of things to be done between May and October. On top of that there were a lot of challenges that would be ahead of us that I did not expect. In spite of them all, we inaugurated the health clinic on October 10 as planned.

Now, let me tell you a few things: 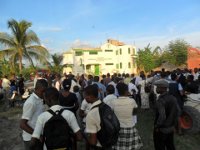 The Crowd Coming for the Inauguration

Just a few days prior to the inauguration it did not look like it was going to happen. We had a team of valiant women and men who were working hard in cleaning, painting and all to make things happen and it has. They did all of that in the name of Jesus.

Let me tell you that we have come a long, long way. At this time last year, we had just broken ground for the construction of the health clinic. We had roughly 5% (if not less) of the money needed to build the building. We started anyway. Since then many families and individuals have given generously “in the name of Jesus” to see this building built. Many Churches have cheerfully given toward the construction and they have done so “in the name of Jesus.” Work teams left their homes and families to come to work in the clinic. They have joyfully done so “in the name of Jesus”. In fact, some men came back twice in a short span of time because they wanted to see this building serving the community. I was touched and I am still touched by the love and the generosity of God’s people.

And, it was “in the name of Jesus” that two teams came to serve my people this week. They have met all kinds of situations. Some of them broke their hearts. Their work gives them joy knowing that they have improved the chances of several people to live longer. In fact they have saved and enriched many lives. They did not come because Haiti is the twin sister of Hawaii. We all know that she could be, but the reality is that she is not. They came to serve “in the name of Jesus”. Should I repeat that I am touched by their love for my people? 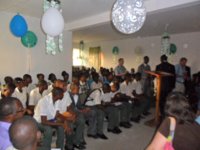