Skip to content
The EditorDecember 24, 2013 Mission News No Comments 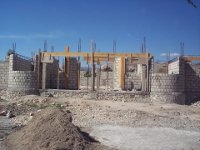 The days of the year 2013 are running down. We are breathing the air of its 357th day today. As the year is folding we want to remind you of one major change this year: Brian Sevits became co-forwarding agent earlier this month.

I thank God for the vision he gave to dad, Fred Green, about 20 years ago. He went to Haiti the first time in March 1994. I was 21 then. He had the vision of training a national, whose role would be to help spread the Good News of Jesus Christ in his homeland. There were lots of hurdles in his way, but he succeeded when I found myself in the classrooms of Central Christian College of the Bible in the Spring Semester of 1998. 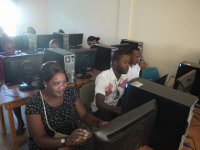 A new group of students at the Vocational School

Needless to say that I was blessed to be the one God led him to. I returned to Haiti in the Summer of 2002 after studying at CCCB and CCU then CBC & S. This teacher and preacher of the Word of God wrote letters, talked to people face to face and raised funds. He drove many thousands of miles each year in the last 20 years to make Salonique and Living Water what they are today. He did it all to foster the growth of the kingdom in Haiti.

Dad has already contributed to the education of several thousands of Haitians in the last twenty years. This was done at all grade levels including elementary, high school and university. He has served not just the churches started by Living Water, but more than 30 other churches inside and outside of Gonaives. He was used tremendously by God in establishing schools, a health clinic and other training institutions. He has invested himself in a lot of preachers via his infamous seminars. His Bible teaching charts are used all over the place and they are known to simplify complicate Bible topics. He has always worked hard so that Living Water can pay its workers on time. He likes to tell me that he is a bread and butter man. Consequently in our over a decade of existence, we have always been able to pay our salaries on time, except a few times due to the economic challenges in the USA. I will refrain from talking about our personal dad-son times that I have had, especially while covering miles on the road, because it would get too emotional. I am thankful to my God for this giant in the faith, for this role model and mentor, for this dad that He has given me. 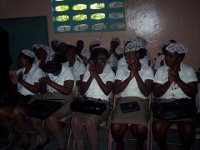 The ladies choir at our church

In the last few months old age has  made it difficult for dad to do what He usually does with ease and grace. So we were in need of someone to come along to help with the forwarding agent role that dad has filled with success and efficiency for so long. Brian and Jessica Sevits humbly and generously accept the challenge, so as of December 2nd of this year, Brian became the co-forwarding agent. The decision was taken in a Spirit-filled meeting, which took place at Cory and Priscilla Mahaffy on November 7th of this year. So Brian as the junior forwarding agent needs your prayers. Please join me in thanking God for my dad Green for His faithful service to Haiti and to Living Water. Dad hopes to return to Haiti in February, if that is the will of God.

Attached to this newsletter are three photos. I hope you can enjoy them. May the Lord bless you this Christmas season and may we keep HIM in Christmas.