Skip to content
The EditorJanuary 17, 2014 Mission News No Comments 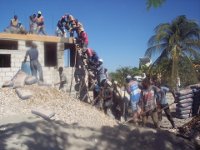 Pouring Concrete on the Eastern Roof of the Transitional Church Building

Greetings to all of you in the name of Our God and Savior: JESUS! Because this is the first communication that I am sending out this year, allow me, even this late, to wish you all a “Happy New Year!”

My friend Rhonda has decided to have “A year of gratitude and thankfulness.” Yesterday, she expressed her gratitude for God’s Word. She has challenged her friends to join her in this and I should, but not being a faithful “face booker” I am hesitant, but we all need to be grateful for what God has done for us. 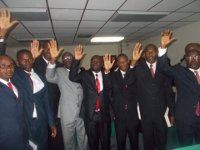 Eight of the Ten who Became Oathed Ministers of the Gospel

I am grateful to God for all the mountains that He had moved for us in 2013. It was a huge burden to start the transitional church building. Many of my friends, Doug Delp, in particular, found ways to put the word out. On August 24, we broke ground. We had only 5,000 USD then. Today we have already invested over 70,000 USD in the construction. What a Mountain Mover we serve! That investment laid the foundation of the building, laid all the block on the first level, bought the house jacks and much needed plywood for the roofing, poured the concrete on the eastern side of the roof. Praise God. Thanks to all of you who gave. We ask you to continue the journey of the construction of the transitional building with us.

Another Mountain that God moved is that of having ministers who are fully recognized by the Haitian government. God has moved all the obstacles that were set before us and has granted us 10 ministers who are fully recognized by the State. Eight took their oath in Port-au-Prince and two took the oath in Gonaives. These men are now free to do their God given job without any problem now. 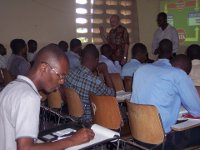 Dr. Sharp Driving Home a Point about the Truth and the Lie

For years I dreamed of having Dr. Sharp come to Haiti to teach my people. Even before I met the man I listened to many of his lectures on tapes. When I finally met him I felt like a little boy who has met his sports hero. Last year he promised brother Cody McDaniel that he would come with him to Haiti. There was one issue: his wife’s health. Well God took care of that. He healed Diane. Dr. Sharp was not only able to come to teach, but his wife came with him. About 70 young men and women attended his classes and they thought with me that was some of the best teaching they have ever received. One of them told me last night, we need Dr. Sharp every year. Another said if we cannot have him permanently, we need someone like him. I praise God for removing the Mountain that was set before Dr. Sharp so he could come and bless us. My advice to you is that of Bill Hybel’s: Stop looking at the mountain. Look at the One who can move the mountain.