Skip to content
The EditorAugust 28, 2015 Mission News No Comments 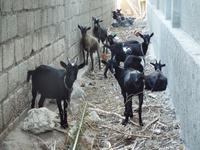 A Version of the Biblical Little Boy’s Lunch

Greetings to you in the name of Our Lord and Savior: JESUS!

Lately I have had encounters that make me think I might be getting old. I have met people that I thought were my age, and then found out they were my students some twenty plus years ago. Hmm! In some cases I would say something like “This cannot be …”. And the shocking response in some cases is the not-wanting-to-hear answer: “Yes”. 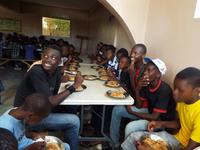 Teenagers Having Fun Over their Meals

So if we are to build people for the Kingdom, the best time to start is not tomorrow — it is today. If we wait for tomorrow, we will learn tomorrow it is too late. This reality should motivate us to go purposefully fishing for the Master today and each day. If we are to wait for tomorrow, some will never see it. Others will see it, but it will be too late for them.

A family in Indiana wanted to rear a generous man. They taught their boy at an early age to give. The boy raised a goat. Would you believe an Indiana boy would choose to raise a goat? Whatever your answer, this is the case. 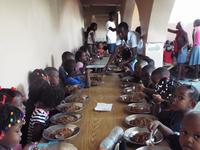 Little Kids Enjoying their Meals After their Camp Activities

Then the boy decided to go global with his hard earned money. Two years ago his Grandpa and Grandma, Larry and Jane Sims, were coming to Haiti. He sent money for needy families to buy goats and raise them. He had one stipulation. The firstborn of every goat should be given to another needy family. Long story short, the first photo will show you the herd of goats of one family. This family was blessed by buying goats whose parents were what we call “Raise-three goats.” Meaning they give birth to three goats instead of one or two. Oslet, the owner of those goats, is a deacon in our church and is very proud of his herd.

The biblical boy gave Jesus his loaves and fishes and Jesus fed thousands. This little Indiana boy gave his hard earned money to buys goats for Haitian families to raise. Now many are being blessed because of his generosity. 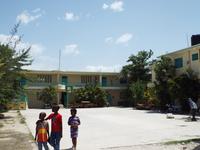 A New Campus Through I-68

Tomorrow will be the official last day of the 2015 Summer Camp at Living Water Christian Church. Neither kids nor parents are looking forward to that. Each has their reasons. Maybe the organizers, teachers and other helpers are looking forward to having a break. But some were getting addicted to the activities. Because in their words: “Working with kids is fun and rewarding.” Yes, it is a time for them to play, sing songs, do crafts, learn a Bible lesson or two each day, eat and more play before going home. It looks simple. It looks repetitive. It may appear ordinary. However it is not. It is building a new generation of people in Haiti who will believe in God, worship Him, serve Him and give their lives to His service. But the time to do it is now.

We are very grateful to First Christian Church of Mountain Grove for making this possible. Besides the 300 plus kids, over a hundred more people benefit directly from the feeding part of the program. There is also the peace of mind of the parents during all the hours the kids pass at Living Water campus. May God bless you all for making this activity possible. 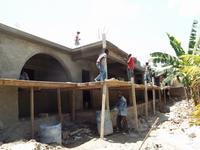 A new group of students is coming to our school in less than two weeks. Hundreds of them will be returning students. They will be welcomed in a nicer campus. They will be glad to see how it has improved if they have not been around this Summer. One organization is responsible for that: I-68. It sounds like the name of a highway in the USA. Right? It is rather a short way of say “Isaiah 6:8.” They have said: “Here I am. Send me.” And the Lord has sent them to Living Water. They painted. And some other members of the church continued their work. Thanks to Richard and Carrol and crew. God bless you all. As we are building the women and men of tomorrow, thanks for being part of the equation. And, keep up the good work. 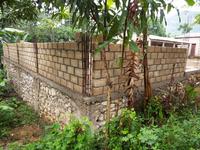 During all the twelve-year existence of our school people have consistently asked us to start a Kindergarten/Preschool. For twelve years I told them “Next year”. I have to confess that I have feared to tackle the education of this age bracket due to the additional expense. Then Gine, my wife, got involved in pushing the idea. To her great satisfaction Bill and Jennifer Wagner picked the idea up after brother Hinkle and the Church of Kenai secured the property. Brother Wagner and a team of valiant men came in June. Now we have a building near completion to welcome those toddlers in two weeks. I believe with the other leaders of the school, this is the time to begin their education. We will finally start at the right place. I know from those little boys and little girls we will raise mighty women and men for both the Kingdom of God and Haiti. 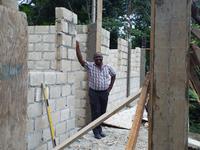 Almost a year ago, on September 15, brother John Mitchel arrived at Living Water for a two-day visit. Dr. Sharp was his friend who brought him to Living Water. Since this visit we have had a new cooling system at the computer lab. The students, the professors and the computers are all grateful to brother Mitchel. He has also helped us furnish the library with chairs and some books. On top of all that he provided the much needed funds to build two classrooms for Marmelade. Buidling in Marmelade is a hard endeavor. It is a harder chore because of where we have chosen to put the classrooms. The ground is unstable. There is a big slope. There has not been rain to bring the river sand. The workers have to be brought from Gonaives to level the place where Jude wants it to be built. It is taking way longer than I thought and consequently ended up costing more than we had planned. The great news is we have passed all the hard part of the construction. Now the long awaited foundation is done. Concrete blocks are laid. We are now ready to start the roof as early as next week. We hope this will be ready to welcome students by the second week of school. Ezechiel, the minister there, is very proud of the work done — both quality and quantity (square footage of classrooms). 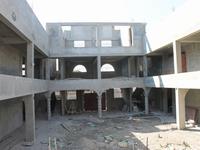 An Interior View of the Transitional Building

These classrooms are going to be used to rear a new generation of women and men who will be educated ones who were influenced by Jesus Christ. Praise to Jesus for that.

We praise Jesus for the progress done on the transitional building. Now the hired company is working on the trusses for the metal roof. Tomorrow will be better, but it starts today.

May God bless you all for your partnership, your prayers, your generous donations, and your love for Haiti and Living Water. I am glad someone said “Yes” to make my tomorrow back 20 years ago what it is today. Together let us do the same for others.

Your teammate in Christ,